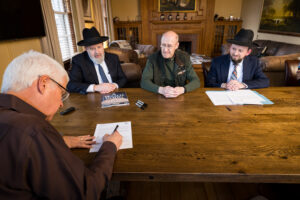 “If we’re selling our chometz, it has to be done right, no shortcuts,” says Mark Brown, president and CEO of Sazerac Company, the second-largest spirits company in the US and parent company of Buffalo Trace bourbon. Mark might not strike you as the man responsible for thousands of bottles of some of the best bourbons out there, manufactured in the same Kentucky factory and rickhouses where it’s been done for the last hundred years. But don’t let Mark’s charming, laid-back accountant-like demeanor and British accent fool you — he knows bourbon better than anyone in the state of Kentucky, and is determined to make sure observant Jews can enjoy it as well.

Yet Mark was never anyone’s Shabbos goy and didn’t grow up among Jews. His Welsh roots carried him on a journey from being a door-to-door salesman in London’s East End to moving up the corporate ladder and landing the top spot at Sazerac, where he has grown the company as its CEO for the last 25 years. He may have been born in London’s East End at a time when scotch was the only drink served, but he’s grown his business empire into a conglomerate of 400-plus beverages, spanning several continents. And the crown jewel of Sazerac’s empire and the reason their corporate offices are housed in nearby Louisville is the place we are standing today: Buffalo Trace distillery in Frankfort, Kentucky. These well-worn grounds also make Blanton’s — the  bourbon known for its metal horse top of every bottle, Eagle Rare, E.H. Taylor, and so many others.