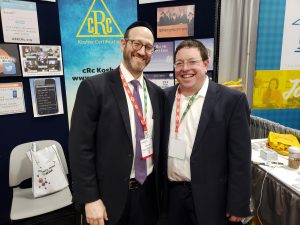 Once again, the cRc attended Kosherfest, the annual Kosher Food Show, held this year on November 12 and 13 in Secaucus, NJ.  Dubbed “The Worlds Biggest Kiddush”, vendors from all over the world come to showcase their products, hoping to gain a foothold in the the growing Kosher market.  The cRc staff distributed over 700 of their 2020 Kosher Symbol Cards, with many expressing their excitement over the usefulness of such a card, especially “when shopping at Trader Joes.” Many consumers stopped to discuss current kosher topics, ranging from the acceptability of different kosher agencies to the cRc’s famed Liquor List.  Many former Chicagoans felt at home visiting the cRc booth, reminiscing about the old times, when Romainian meat was more accessible.

The cRc plays an important roll in the global Kosher world.  The cRc Kashrus Administrator, Rabbi Sholem Fishbane, spent the two days of Kosherfest meeting with the heads of other Kosher certifying agencies, as well as with representatives from locals as far as South Africa, Australia and Japan. Rabbi Eli Markowitz, the cRc’s New Account Manager, met with current cRc clients that were attending the show, as well as those companies seeking a nationally recognized Kosher certifying agency.

The cRc prides itself in its commitment to its clients and to the kosher consumer. Kosherfest is a unique opportunity to blend both of those commitments,  allowing the cRc to positively make an impact on the world of Kosher, both at home and throughout the world.